Want to Get Massive Amounts of Twitter Followers Fast?

Discover How To Ethically 'Steal' Thousands Of Followers From The Twitter 'Gurus' - Without Being Banned, Sued Or Thrown In Jail! 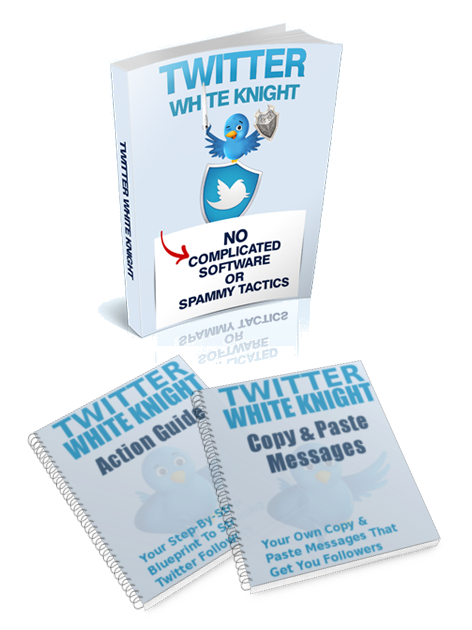 Here's Your Chance To Get One of The Best Ever
Twitter Training Guides At A Huge 70% Discount...

WARNING: Following the advice of the ‘twitter gurus’ can get you banned for life from Twitter…or worse. Just ask the spammers or software companies that have recently been sued by Twitter for spamming and enabling spam.

Hard to believe? Sure is. But the fact is that these ‘gurus’ are broadcasting this false information day and day out, while there’s a very small group of smart marketers pulling massive (non-spam) traffic from Twitter using 100% white-hat techniques.

No risk of being suspended, banned…or worse.

When you get your hands on this Manual you’re going to discover how to ethically steal followers from even the biggest ‘gurus’ in your niche.

This is an amazing shortcut secret to a massive list of followers that I haven’t seen revealed anywhere else.

It doesn’t matter if these ‘gurus’ in your niche have used spammy tactics or software to build up their list of followers…because with this information you can siphon out the best of them and take them as your own.

And like I said... there won’t be any risk of losing your account or all the time and effort you’ve already spent setting it up.

I remember what it was like when I first started trying to get traffic for my site using Twitter. It was pretty darn frustrating. All the conflicting advice, advice to start spamming and other twitter techniques that just plain didn’t work.

Over and over I tried the ‘latest and greatest’ Twitter methods without any success. I even had my account banned for spamming…even though I had no idea I was doing it (I was told it was totally legit…and I was lied to). Can you imagine what that would feel like if it happened to you too?

All that hard work, all those hours, that money you paid for spammy software…gone.

It’s risky and zaps your mental energy (and pocketbook) very quickly. If you have the stomach for huge risks and an endless supply of energy…and maybe some even sneakier tricks up your sleeve to get your account back…then this option could work for you. Otherwise...

Let me share with you how you can take the followers out of these ‘gurus’ hands...

(or anyone else on Twitter who you want to ethically ‘steal’ followers from…) and send them to any page or site of your choosing.

If you said yes to any of the above, then you might want to jump on this opportunity right now...

I’m about to share with you how you can:

Let me warn you…

What you’ll find in this report is the stuff that works. Laid out step-by-step in a way that eliminates confusion and information overwhelm. You’ll know exactly what to do and when to do it.

This is the manual I wish I’d had when I was starting out. It would have cut my learning curve to almost nothing… and had me bringing in floods of (non-spam) traffic within just hours of starting.

Here’s a small sample of what you’ll discover
in the Twitter White Knight:

But don’t take my word for it, I want you to try this out for yourself...

Truth is, the only thing stopping you is your own doubt.

All good questions, of course.

But it’s that very voice of doubt that is keeping you from moving forward.

I know it’s tough to swallow, but doubt is the reason most people don’t take action, and consequently why most people stay stuck.

Let me ease your concerns though…

I’ve put together a no-risk offer here. All you need to do is click the button below and fill out the short action form. You can use your credit card or your PayPal account and I’ll take you to the download page where you’ll get INSTANT ACCESS to all of the materials. You don’t pay ANY shipping charges…And you don’t risk a penny. Because you get a…

Do you understand what that means? You can order the program, use it, treat it as your own, have almost unlimited Twitter traffic at your command for a full 60 days… And these hard-hitting strategies will work for you, or just shoot me an email and you’ll receive a prompt refund of all your money. No questions asked, no hassles and no hard feelings.

Don’t decide now…give it a try for 30 days and witness the power yourself.

Here is what you'll get in the Twitter White Knight Package Today... 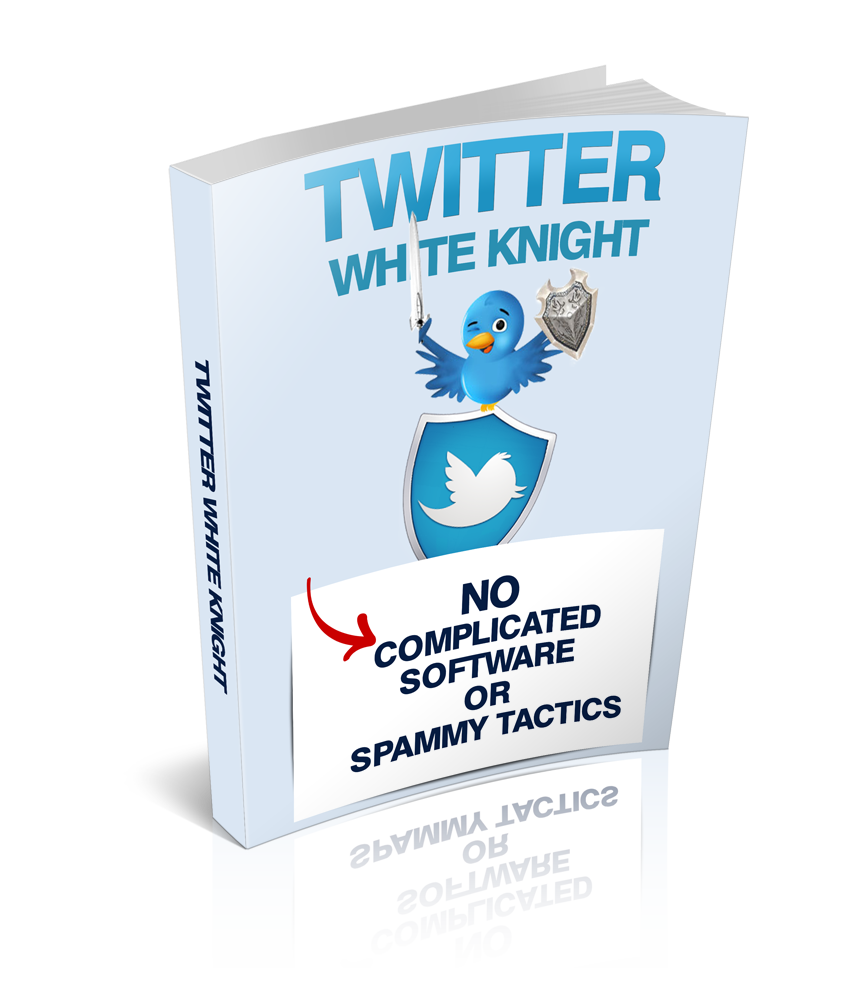 It’s all here …everything you need for total Twitter domination. I don’t pull any punches here – no fluff and no BS. It’s a step-by-step, fool-proof way to a Twitter traffic flood.

YES -> It’s dead-effective and super easy to do.

YES -> The results you see will be dramatic and immediate.

Therefore, I feel I must make this deal as easy to swallow as possible…or I’ll never get smart entrepreneurs like you to try it. (And believe me, it will change your business forever once you see what the fuss is about!)

So I’ve created the best deal I can think of:

The methods described in painstaking detail in this manual will be more effective than any piece of software, and won’t cost you anywhere near that much.

The last Twitter eBook I bought was $27. And it stank…

The info I’ve crammed into Twitter White Knight would be a bargain at $27 (and rest assured, I do sell it for $27 elsewhere).

But if you act right now, you can get your own personal copy for just:

But there is some bad news…

I’m only letting a limited number of students get the Twitter White Knight program ‘at this special discount’ and once it’s full – that’s it!

Here’s why I’m doing this:

Honestly - I’m new at this.

I’m not a ‘guru’ or whatever. And I’ve never released any of my personal money-making, traffic-grabbing strategies to the public before. This is just a marketing test to see how the market reacts to what I can share from my experiences.

So I have to tell ya: I simply can’t guarantee how many of these manuals I’m going to sell or when I’ll raise the price. But I reserve the right to do so without warning. That means, if you decide to wait, I can’t promise that you’ll even get one or that the price won’t have gone up when you come around.

So why don’t you give it a try. You’re completely protected with my 60-day 100% money-back guarantee.

P.S. - Here’s the “catch” - you must do take advantage of this offer today, right now.

Don’t put this off.

(I’m taking a lot of flack from a few real-world street-smart Marketers for practically giving this amazing breakthrough manual away, after all of the pain and research that went into it. But screw it. I want to share this with as people in need as I can reach, without breaking any body’s wallet).

Do you really want to spend ANY more time worrying about your traffic or your twitter account?

Try out this program now and put your mind at ease.

No, Thanks. I Want To Skip This Offer.

This is the bottom slider area. You can edit this text and also insert any element here. This is a good place if you want to put an opt-in form or a scarcity countdown.